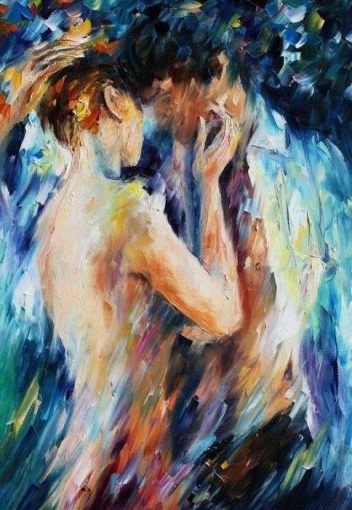 There is no doubt that eye contact is vital in social interactions and that the subtle social cues people share are conveyed primarily by gaze. But sometimes gazing into another’s eyes is taxing, even overwhelming.  There is a reason for this and it is related to cognitive depletion.  Social attention and the gaze involve a widespread neural network processing face recognition, sensory reception, gaze perception, the attention system, emotion centers like the amygdala as well as prefrontal executive areas.  In fact, we often drop eye contact when it requires too much mental energy.  Cognitive depletion is real,  and looking deeply into someone’s eyes utilizes cognitive resources at a high rate causing other things like reasoning to fall away.  I am not saying that the ensuing mental drift isn’t fun, it can be great fun, even a little addicting just as romance can be addicting, besides we all have people we would go anywhere just to talk to.

Averting our eyes during conversation is a sign that there is interference between eye contact and language processing. Eye contact uses the same mental resources as complex reasoning and maintaining eye contact takes a lot of effort which makes sense given its great importance in the social fabric of our species.  So, when carrying on a conversation that requires us to reason or to be quick witted and playful, we may periodically look away as a way to conserve those resources.  Researchers in Japan asked people watching a video of a person’s face to stare into the eyes continuously as they performed a verbal task. The task was made increasingly difficult until performance diminished, indicating mental interference.  In one case the eyes on the screen were directed toward the viewer, and in the other toward the side.  The decrease in performance only occurred when viewers were looking into the eyes. The interpretation is that cognitive resources needed for verbal reasoning are diverted in order to maintain eye contact.  It seems we either suffer the embarrassment of being tongue tied, or glance away to get ourselves together.  Of course, the interpretation of these two behaviors is left to the partner in conversation so things can get awkward. What is going on in the mutual gaze?

Cognitive functions often involve synchronizing the activity of neurons in several, often distant regions of an individual’s brain.  For example, visual working memory involves two separate areas, the prefrontal cortex and the parietal cortex.  Electrical signals in neurons in the two parts of the circuit become synchronized during identity-matching tasks, meaning that their activity becomes time-locked and occurs in phase because of shared synaptic connections.

We know that when people coordinate their own actions small networks of neurons are formed between brain regions.  But what about when two people interact together?  The brain waves of two musicians synchronize when they are performing a duet and this occurs in regions involved in social attention.  The same thing happens when two musicians improvise on guitar , or when people sing together and in each case synchrony occurs in the inferior frontal cortex, an area that includes the mirror neuron system and is essential for theory of mind and empathy.

The common thread in all of this is that emotions promote social interaction by synchronizing brain activity between individuals.  Brain networks in certain areas get in sync in groups of people viewing emotional events at a movie, or attending a political rally.  And this occurs in cortical and limbic emotion circuits. The idea is that enhancing the synchrony of brain activity across individuals promotes social interaction, mutual understanding and group cohesion.

Mutual gaze, the link in attunement

Eye contact creates a link between individuals that involves mutual attention and works in concert with other social recognition signals, like facial expressions and body language.  Here is the question; does a mutual gaze in itself cause activity in two persons’ brains to synchronize? If so where in their brains, how quickly is the link made, and what are the consequences?  Simultaneous measures of brain activity in two people interacting are new.  Here are two of the most rigorous ones.

Dumas et al. used dual-EEG setups to record brain waves from pairs of interacting individuals.  They found inter-brain synchronization in the right centroparietal region, an area thought to play a pivotal role in social interaction.  A group in Japan used fMRI to measure brain activity in two interacting people at the same time.  They demonstrate that mutual eye contact synchronizes spontaneous activity in specific areas of the brain and conclude that synchronized brain activity is crucial in establishing face-to-face social interaction.  Synchrony occurred in the inferior frontal gyrus (IFG), the region rich in mirror neurons.  They also showed, and this is cool, that synchronization of eye-blinks is also due to mutual gaze. So, if you and your acquaintance find that you are blinking in sync, it could mean that your emotions are in sync, too

The mutual gaze in art

Suzanne Dikker combines cognitive neuroscience and artistic expression.  In some of her work, she explores the science of social attention both in the lab and in the studio.  The installation below, the mutual wave machine, was made in collaboration with Peter Burr & Diederik Schoorl to explore the elusive notion of being on ‘the same wavelength’ with another person through brainwave synchronization. 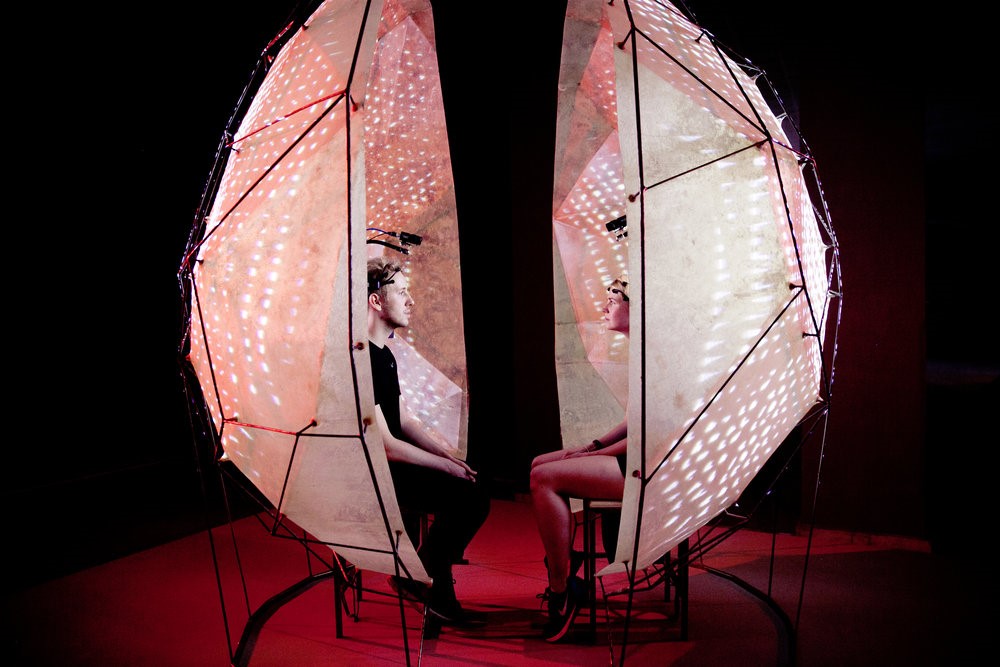 View another of her works, Mutual Brainwaves Lab demo, done in collaboration with Matthias Oostrik.  And once you have seen that, I am sure you will enjoy NeuroTango Experiment: Brainwaves in Sync.

Face-to-face in a world of screens

Their results provide cool insights into the evolution of our social brains, but also raise all kinds of questions about where our technology is leading us. They point to two distinguishing features of face-to-face communication that seem to be lacking in social media.  First, direct personal interactions allow the integration of multimodal sensory information. The partner’s nonverbal cues, facial expressions and gestures, can be used to modify one’s own actions and speech fluidly during a dialog.  And second, face-to-face communication involves continuous turn-taking behavior between partners, a feature shown to play a pivotal role in social interactions.  These are lacking in Twitter and perhaps that is why twitter posts are so frightfully empty- a person writing or responding to a tweet is in dialog only with himself.