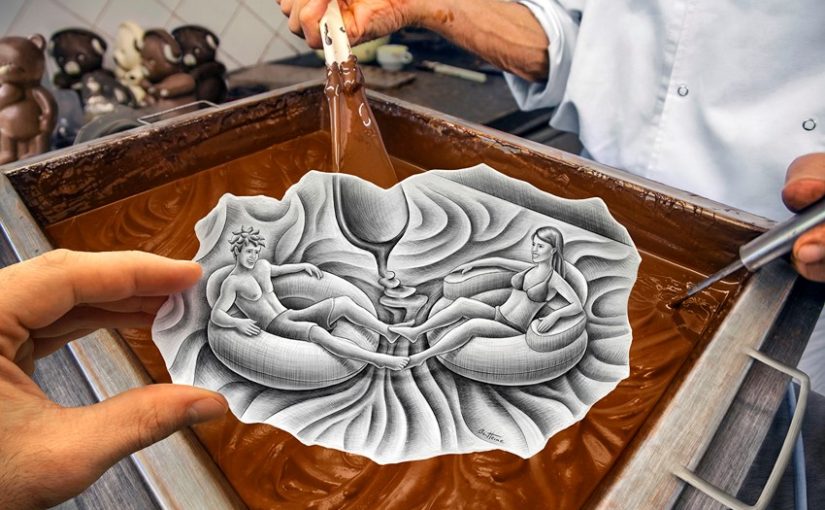 Might as well face it, you’re addicted to chocolate and not just for the taste.  You love the way chocolate makes you feel, and that is something worth looking into. Devotees know that chocolate, or cacao to be precise, contains a slew of neurotrophic compounds.

The cacao plant, Theobroma cacao, is an evergreen tree native to Mesoamerica. Large, oval seed pods grow on the trunk and harvesters crack the pods open to take out the seeds, cacao beans.  Raw cacao beans are bitter, but they are healthiest when eaten this way.  Cacao’s medicinal properties were known to Aztec and Maya cultures as long ago as 2000 BCE.  To them, cacao was a heavenly gift from a feathered serpent god known to the Maya as Kukulkan and to the Aztec as Quetzalcoatl. The beans were ground and mixed with corn meal and chili peppers to make an invigorating drink the Aztecs claimed was for success with women. David Wolfe, author of Naked Chocolate, thinks Montazuma may have consumed fifty cups of cacao a day. Either that’s an exaggeration or Montezuma suffered mightily from kidney stones; cacao beans are rich in oxalic acid. 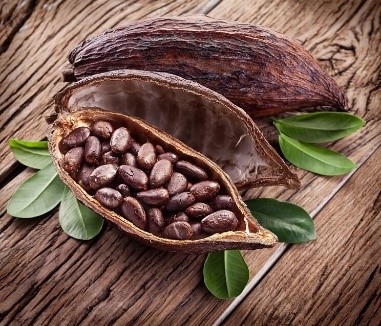 In 1519 Hernán Cortés visited the court of Montezuma II and found that cacao was more cherished than gold, something that surely caught his attention. 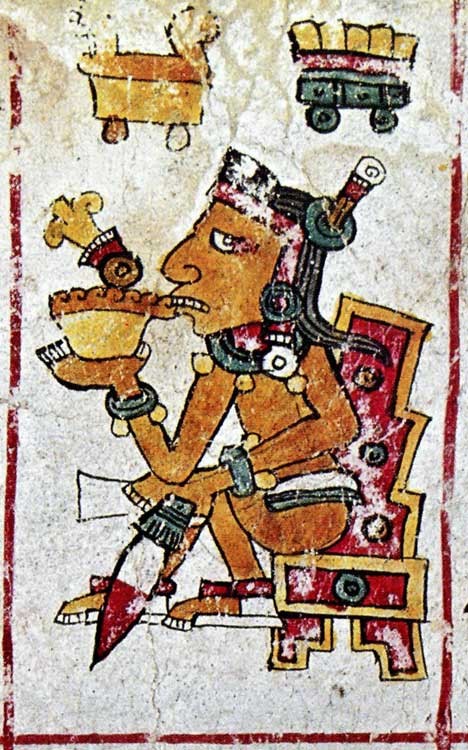 Cortés brought cacao to Spain where it gained a reputation as an aphrodisiac and to this day the chocolate industry loves to use cacao’s Mesoamerican origin as shorthand for “sexy” and “exotic”. There may be something to this as we will see. In Europe the bitter taste was sweetened with honey or sugar and chocolate became quite popular in wealthy society. 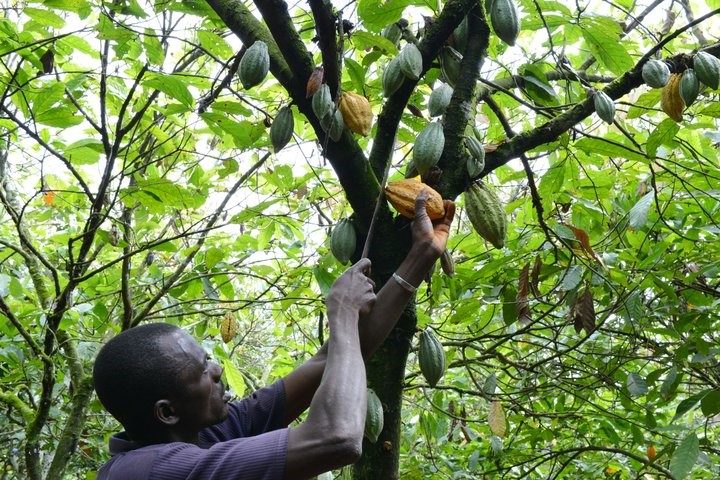 The history of cacao is fascinating, see Sophie & Michael Coe’s book, The True History of Chocolate, and check out these fun videos by Deanna Pucciarelli, and by David Wolfe.

Cacao vs. cocoa and why it matters

Raw cacao beans are superfoods rich in antioxidants, minerals, vitamin C, essential fatty acids, neurotransmitters and hormones. In fact, cacao looks like a universal smart drug (nootropic). If you’re a disciple you know that dark chocolate is healthier than milk chocolate because it contains a much higher percentage of cacao and perhaps a little organic cane sugar, but no high fructose corn syrup, partially hydrogenated oil, artificial color or flavoring.

Processing determines whether the beans become cacao or cocoa. Raw cacao is made by cold-pressing the un-roasted beans. These can be chopped into small pieces to make cacao nibs.  Sometimes organic cane sugar is added.  Crunchy, with a deep chocolate flavor, cacao nibs retain all the nutrient and antioxidant power of the bean. You find them at places like Trader Joe’s. 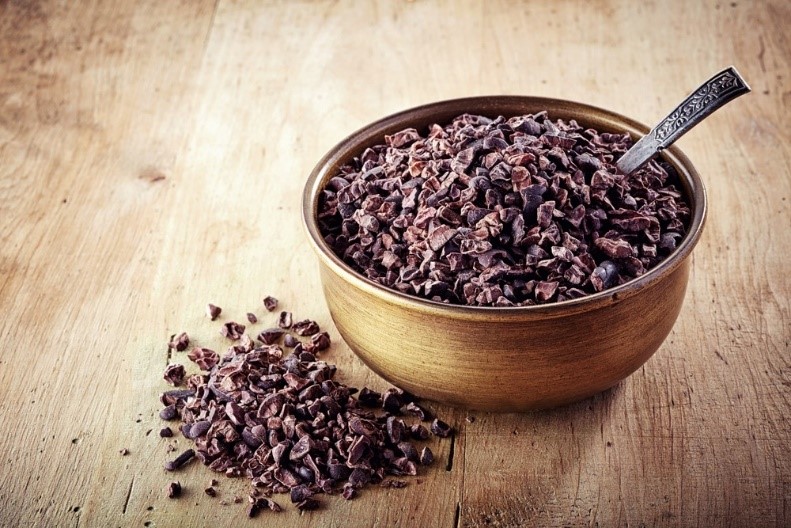 Ground cacao beans can be heated at low temperature to separate the fatty parts and make cacao butter for use in baking or even as a moisturizer, but don’t confuse it with cocoa butter, that’s different.

Cocoa starts the same way cacao does, but the beans are heated to higher temperature. The result is a sweeter flavor, but the high heat affects the beans on a molecular level, degrading nutrient content. Cocoa powder mixes often contain added sugar or other sweeteners and you won’t find cocoa nibs, these are packaged as chocolate chips. Added dairy is a problem because it limits the body’s ability to absorb the nutrients in cacao.  All the same, nearly every chocolate product on the market contains fillers like powdered milk and high fructose sugar to lower production costs and lead us to connect chocolate with a super sweet taste. So, even if you stick to products claiming a high percentage of cacao, you still have to deal with the body’s ability to absorb it effectively. Check the labels carefully.

Cacao contains psychoactive compounds that can profoundly affect mood, including some that evoke the sensations that accompany courtship and love. Bottom line, you can feel good about your infatuation with cacao.  Here’s why.

Limerence, you know it as the state you’re in when infatuated with another person, a very big deal for us humans.  It results from biochemical processes in the brain that alter production of, among other things, endocannabinoids, norepinephrine (fight or flight hormone), dopamine, phenylethylamine (a natural amphetamine and aphrodisiac), estrogen and testosterone. This chemical cocktail produces euphoria and it can drive you to extremes in pursuit of the object of your affection. Helen Fisher gave a brilliant TED talk on the subject. I highly recommend it, and the rest of her work. She stresses that love it not an emotion but a drive, an obsession with strong connections to the brain’s reward systems.  In brain scans, romantic love lights up the same areas as cocaine.  Here is the kicker, cacao lights up those areas of the brain, as well.  Under the right circumstances, cacao engages a similar intense craving and is addictive in a very real sense.

The bean contains compounds found throughout the reward system. One in particular is phenylethylamine (PEA), also known as the love chemical. It is a natural amphetamine, produced by neurons, that acts throughout the brain either as a synaptic modulator or as a neurotransmitter to make us absolutely giddy in a fun way. It causes your pulse to quicken and changes blood-sugar levels leading to feelings of excitement and alertness. PEA stimulates other neurons to release dopamine and the feelings of attraction, excitement and nervousness it elicits contribute to the butterflies we feel when falling in love. I cannot help but think that phenylethylamine withdrawal explains why people sometimes turn to chocolate when love is lost. What’s more, cacao, Theobroma cacao, derives its name from theobromine, which is present at high concentration depending on how the bean is processed. It is a CNS stimulant and vasodilator related to MDMA only much milder. Theobromine is also thought to be a mild aphrodisiac.

Many people know THC , derived from Cannabis, as the chemical responsible for the mind-altering effects of marijuana. And many know that THC mimics a naturally occurring family of neurotransmitters, termed endocannabinoids.  One of these is anandamide which is produced by neurons throughout the brain and acts by binding to receptors expressed on the surface of neurons. Here is the point, cacao is a major food source of anandamide and activates the same transmitter receptors as both natural endocannabinoids and THC.

Anandamide has been called the bliss molecule, aptly named for ānanda, Sanskrit for eternal bliss. We know that anandamide does a lot more than produce a state of heightened happiness. It is synthesized in areas of the brain that are important in memory, motivation, higher thought processes, and movement control and plays important roles in pain, appetite, and fertility. Like most neurotransmitters, native anandamide degrades quickly which is why it doesn’t produce a perpetual state of bliss; probably a good thing. Cacao, however, contains two chemicals that inhibit anandamide breakdown and extend its effects. The same inhibitors might function to amplify the action of brain derived anandamide as well, and that is something worth looking into.

Both anandamide and THC act via cannabinoid receptors to increase production of dopamine by neurons and it is likely that dopamine is the cause of the feelings of pleasure and elation. I need to point out that there isn’t all that much anandamide in chocolate, it would take pounds of cacao to achieve the high you get from smoking today’s marijuana. Then again, you might be able to titrate your cacao high with greater subtlety (Montazuma’s fifty cups a day?).  To learn more, look here.

Cacao is terrific for boosting production of endorphins , dopamine, serotonin, oxytocin and endocannabinoids, the team of neurotransmitters responsible for positive mood. But it also has particularly high antioxidant activity because of high levels of flavonoids .  These accumulate in brain areas involved in learning and memory, notably the hippocampus, and have been shown to acutely improve aspects of cognition and improve cerebral blood flow.

As Audrey Hepburn once said, “Let’s face it, a nice creamy chocolate cake does a lot for a lot of people; it does for me.”

Update 10/31/18 – Seems that the domestication of cacao is way older than the Aztec and Mayan people, about 1,500 years older, and it didn’t originate in Central America, but in the upper amazon. New work found cacao residue in pots in an area in Ecuador first occupied by the Mayo-Chinchipe people about 5,450 years ago.  Evidence of domestication comes from both chemical and DNA analysis. One implication is that the Amazons had a more sophisticated culture than previously thought, a culture that they exported.  The story of cacao continues to intrigue.  Here is a link.