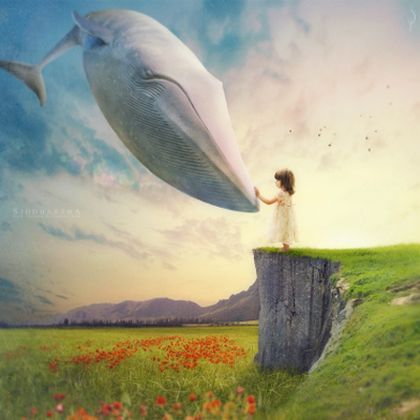 In a lucid dream you are aware that you are dreaming and also self-aware almost as if you were awake. In that dream state you have the full mental faculty to think about, interact with and explore the dream as it unfolds all in the context of your own self-knowledge and memory. Remarkable things are possible; you can direct the content and plot, manipulate the action and characters, and even choose the time to awake. Lucid dreams look and feel vivid and tangible, on a par with waking life. In a sense you are conscience within the dream; it is the conscious stirring inside an unconscious dream world. With practice you can accomplish amazing feats; fly through space, create new worlds, revisit and embellish a dream, summon specific characters and have realistic sex. The dream can be so vivid that it is hard to re-orientate after awakening. And, lucid dreaming has tangible benefits, including relief from stress, anxiety and grief plus inspiration and even enhanced problem solving. I suspect that you know exactly what I’m referring to.

How Lucid Dreams Differ
Our most intense dreams occur during REM sleep and this is true of lucid dreams as well. Most dreams lack reflective thought and metacognition. Instead they have lots of cognitive peculiarities like bizarre plots full of gaps, delusional thought, and a complete lack of insight into the fact that we are dreaming. These cognitive constraints are simply the result of the neural patterns associated with REM sleep, in particular deactivation of the dorsolateral prefrontal cortex , a recently evolved part of the brain that participates in executive functions  like working memory, cognitive flexibility, planning and abstract reasoning.

In contrast, lucid dreams combine the cognitive features of both wakefulness and dreaming. In a lucid dream you are aware of dreaming, have full access to memory, and are able to control dreamed actions. But at the same time, most of the key features of REM sleep (EEG pattern, respiration, eye movements, REM atonia, heart rhythm) are maintained. This is a very impressive trick.

Our understanding of lucid dreaming at a neuro systems level is quite primitive, but one thing can be said with certainty; self-reflection and volitional control are more pronounced in lucid vs. nonlucid dreams. For this reason, lucid dreaming appears to have a link to metacognition (metacognition just means thinking about thinking, being self-aware).

Work by Simone Kuhn  and colleagues provides some insight into the lucid dream state. They looked for a link between lucid dreaming and thought monitoring using MRI brain imaging. People were asked about their lucid dreaming experiences. They were grouped on the basis of their reported dream lucidity and then monitored using structural and functional MRI while dreaming.

People in the high-lucidity group have a greater volume of neurons in the frontopolar cortex compared to those in the low-lucidity group. Furthermore, the differences in anatomy are mirrored by differences in function. Neural activity in the same brain region increases during thought monitoring in both groups, but the increase is greater in the high-lucidity group. Two conclusions
can be drawn; the brains of people with high and low dream lucidity are different. Second, lucid dreaming and metacognition share underlying mechanisms, particularly with regard to thought monitoring. The same kind of thing is seen using EEG recording. Lucid dreaming is associated with increased 40 Hz activity in frontal cortex compared to non-lucid REM sleep. This is the gamma wave frequency band and in popular theory, gamma is implicated in unifying conscious perception.

So what do we know to date? Lucid dreaming during REM sleep differs from normal dreaming during REM in a structural and functional way. There is not a lot of detail to guide us from here but what we know so far is provocative, and after all, isn’t the very edge of knowledge the very best place to be?

Inducing Lucid Dreams
Many people find lucid dreaming to be a rewarding experience, perhaps you are one of them. Fortunately, enthusiastic practitioners have worked out ways to help induce lucid dreams so if you have the inclination you might want to experiment with your own dream potential. Like meditation it requires commitment and like other skills, it becomes stronger with practice. One place to start is the Lucidity Institute. There are also helpful guides here and here.

A Note on Sleep Patterns
Sleep is characterized by distinct phases; broadly speaking they are light sleep, deep sleep and REM sleep. These cycle during the night with a period of roughly 90 minutes and there are 4-5 REM cycles per night, on average. People differ, but if you knew your sleep pattern you would be able to anticipate the best times to induce lucid dreaming and also the best time to wake. There are apps for tracking your sleep cycle, for example www.sleepcycle.com and several others for iphone and android smart phones. People are using this kind of thing to manage lucid dreaming, but see this critique in Psychology Today.

REM atonia – the Mind Body Disconnect While Dreaming
During REM sleep, the time when most recalled dreams occur, the neuronal activity patterns that would normally orchestrate movement are prevented from reaching the muscles. The sequence of commands continues to play out in the brain but do not elicit movement. This is called REM atonia (lacking muscle tone), and of course some muscles are spared, notable the ones controlling eye movements and breathing. REM atonia is a perfectly normal part of sleep; it prevents us from thrashing around and harming ourselves. It stops us from physically acting out our dreams. There are times, however, when this control fails. Two examples are sleep walking and the strange, often negative, effects of the hypnotic sleep drug, Ambien.

REM atonia occurs when the inhibitory neurotransmitters GABA and glycine are brought into play to shut down brain stem areas that act as relays between motor decision making centers in the cortex (active during REM) and the motoneurons that innervate muscles (blocked during REM). Normally, this all plays out at a subconscious level, but a phenom. called sleep paralysis can have a darker side; the same neural mechanisms apply but in manifestly different and sometimes scary ways. We’ll look at this next. 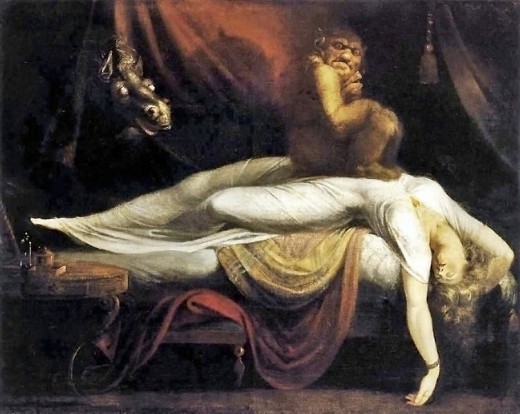 ‘The Nightmare’ by Henry Fuseli

Sleep Paralysis
Sleep paralysis can lead to the scary experience of being temporarily unable to move, speak, or react. It happens most often during the transition between wakefulness and sleep, and is characterized by total muscle weakness (atonia). Since it occurs around the sleep-wake border, sometimes people become aware of the paralysis and are shocked to find they can’t move. This can be frightening and quite often is accompanied by terrifying hallucinations. Some interpret it as a gateway to the paranormal. About 40% of people self-report experiencing this, but the incidence is probably a lot higher.

One hypothesis to explain sleep paralysis is that it results from disrupted REM sleep and this makes sense, although it does not address the hallucinations. It is fair to ask, if sleep paralysis is just a dream, then why does it feel so real? In fact, some aspects are real, for example the normal neurobiology of REM atonia. The emotional and psychological experience of sleep paralysis suggest a clever merger of waking consciousness with the dream world.

The Folklore of Nightmare
Visual and auditory hallucinations or hearing a demonic voice are common during episodes of sleep paralysis. These experiences have always been with us and are noted in the folklore of nearly every culture throughout history. In fact, the paralysis mechanism is a combination of mind-body tricks that can explain reports of ghost parasites, alien abduction and the legendary incubus who sits on the dreamer’s chest. Every culture seems to have a legend; being “ridden by a witch” in southern Americana folklore, or the idea that scary dreams result from witchcraft, a notion that led to witch trials in European societies. English authors of the time termed the experience the “mare” or “nightmare”. In Fiji it’s “kana tevoro”, or being eaten by a demon. In Turkey, it’s the demon Taram Baba strangling you in your sleep and is only remedied by reading passages from the Qur’an. In parts of China, it’s a mouse stealing your breath. In Catalan folklore it’s a giant dog or cat that enters your room and sits on your chest while you sleep. Then there are the nocturnal attackers known as Kanashibari in Japan. Kanashibari, means ‘to tie with an iron rope’ and is derived from the magic of Fudoh-Myohoh, a Buddhist God. The idea of being tied up comes from the belief that ancient Buddhist monks could use magic to paralyze others as if they were bound in a metal rope. The Old Hag is a traditional interpretation of sleep paralysis in Newfoundland. A visit from the Old Hag reportedly starts with the victim becoming conscious and unable to move or speak and feeling a heavy weight pressing down on them.

The folklore surrounding sleep paralysis and its nightmares fills volumes. If you are interested, there is good reading here, and here.  Also, if you enjoy a little titillation, you will like Carla MacKinnon’s video from the Sleep Paralysis Project entitled Devil in the Room. You will find it here.

“By the pricking of my thumbs,
Something wicked this way comes.”
(Macbeth, 4.1)