Although practiced for centuries, Mindfulness Meditation has hit a new high as today’s most popular health craze, and rightly so because of its positive influence on chronic pain, memory, stress reduction, empathy and sense of well-being. Meditation exerts these broad metacognitive powers by influencing conscious and unconscious processes in the brain, so it is fair to ask which neural systems are involved and how. The practice brings about myriad changes in both the function and structure of the CNS. We take a look at the current thinking on the matter in what follows, while recognizing that there are many forms of  meditation and they need not all employ the same neuro-mechanisms.

But first, we should attempt to define mindfulness meditation, and that is not so easy. It is sometimes described as non-judgmental attention to present-moment experience, or as freedom from concentration, rumination and intentional thinking; being passively rooted in-the-present. It is said to be a state of mental activity that is wakeful and relaxed. This excerpt from a review in Nature Neuroscience suggests a helpful definition, although far too reductionist for a proper student of meditation.

Evidence from Brain Imaging
The popularity of mindfulness mediation caused a rash of interest in the brain imaging community desirous to learn how it affects the CNS.

Observation of people in meditation using DT MRI (Diffusion Tensor Magnetic Resonance Imaging) shows that there is an increase in the efficiency of connections between certain brain regions. The method targets myelinated axons, the type of axon bundles that link distant brain structures. The data can be used to determine the integrity and strength of the connecting pathways, and whether performance is improved or diminished due to changes in myelination, the number of axons, or the diameter of axons and hence conduction speed (larger axons conduct faster) 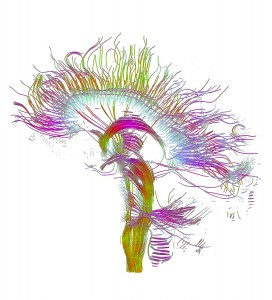 In a study of expert meditators using Integrated Body-Mind Training (IBMT; a standardized method) as the mediation practice it was found that changes in the MRI images during meditation are consistent with increased neuroplasticity. Specifically, the results show an increase in the number of myelinated axons connecting specific regions of the cortex, and also an increase in axon diameter in those pathways, relative to inexperienced individuals.

Both findings indicate enhanced integration.  Interestingly, the increases involve brain regions that participate in learning and memory, emotion regulation, self-referential processing, perspective taking, and empathy; in particular the anterior cingulate cortex, an area associated with self-regulation and the location of the majority of VEN neurons. VEN neurons are the large cells in layer 5 of the cortex that make very fast connections over distance and are only found in highly social animals with large brains (humans, whales, elephants). There is some solid science to inform us about how these changes come about. In particular, we know that activity in a myelinated axon stimulates adjacent glial cells to increase the thickness of the myelin sheath surrounding the axon, thereby increasing conduction velocity and enhancing the strength of the connection. This happens quickly, in a matter of days, and it means that when a certain pathway is consistently activated during meditation the efficacy of that pathway increases. This is neuroplasticity with exquisite specificity. Practice makes perfect, yes?

A different MRI method was used to examine changes in the grey matter of the brain, i.e. the number of neurons and/or the density of local circuit dendrites, during meditation training. This time the training program was Mindfulness-Based Stress Reduction (MBSR), another popular and standardized technique not much different than IBMT. During an 8-week training period, gray matter density increased in the hippocampus, posterior cingulate cortex, the temporo-parietal junction, and the cerebellum. These regions are involved in learning and memory, emotion regulation, self-referential processing, and perspective taking.

The simple interpretation is that meditation training promotes increases in the number of new neurons in these region from stem cells precursors, or enlargement of existing neurons and their dendrites. Either way the findings point again to a substantial increase in neuroplasticity.

To date, the brain imaging work shows that the psychological and cognitive improvements people experience with mindfulness meditation have an anatomical basis. It is very reasonable to suggest that the improvements result from a change in “brain state” rather than a simple training of an attentional network. In other words, it doesn’t work in the same way that general skill training works, and that is interesting! I think we should put meditation training in the same group as other important “brain states”, for example, sleep and the experience of authentic play.

Does the Meditative State Differ from Default Mode?
In neuroscience, the default mode network (DMN) refers to a group of brain regions that are co-active when we are not focused on the outside.  Instead activity in the DMN deceases when we start attending to incoming sensory input. Activity in the DMN is associated with introspection, mind-wandering and self-referential processing; essentially the stream of consciousness (see this cool video). Buddhists call it monkey mind. 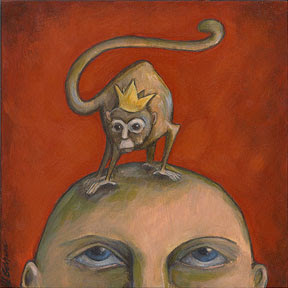 Mason and co-workers at Dartmouth phrase it this way: The resting state of the brain is a silent current of thoughts, images and memories that is not induced by sensory input or intentional reasoning, but emerges spontaneously from within. We spend a lot of time in default mode.

But this doesn’t seem to fit with mindfulness meditation, where the goal is often said to be release from the ceaseless internal narrative. Here is a deep question; do you think that kind of disassociation is possible? I think not, since it appears the DMN supports a kind of mental processing that connects experiences with emotions and puts them into perspective.

Some folks looked into the question with brain imaging. They found that the principal nodes of the default-mode network (medial prefrontal and posterior cingulate cortices) were actually less active in experienced meditators while meditating. Their analysis extended in an interesting way; there was also stronger coupling in experienced meditators between the posterior cingulate, dorsal anterior cingulate, and dorsolateral prefrontal cortices (regions implicated in self-monitoring and cognitive control), and here is the kicker – The stronger coupling was observed both at resting baseline and during meditation.

One interpretation of this is that meditation practice changes the quality of integration in the DMN under all circumstances. It becomes a different default mode. The result is that the individual experiences decreased mind-wandering and greater ability to attend all of the time. This is what they self-report, and it is equivalent to saying that the benefits of meditation practice are permanent and result in altered consciousness, all by the power of neuroplasticity.

The neurobiology of mindfulness mediation is in its infancy. We have some clues about the systems involved, but very little knowledge at the cellular or molecular level. Public awareness of the benefits will certainly drive research and it is going to be interesting to watch as ancient wisdom morphs into modern brain science.
– Neuromavin