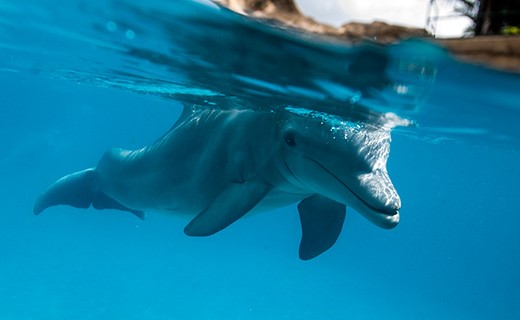 “When the tide came in, these kids started swimming. But not like I had seen before. They were more underwater than above water, they had their eyes wide open – they were like little dolphins.” (Helen Thompson for the BBC).

Moken children see underwater. That is something you and I cannot do, but dolphins can. The Moken people live in the island archipelagos on the Andaman Sea along the coast of Thailand. Theirs is a sea going culture and at earlier times they lived as ocean nomads, entirely dependent on the sea and living full time in their unique house boats. To this day the children are taught to swim and dive from birth and they spend much of their day in the water, diving for food on the seafloor.

Here is the stunning thing, Moken kids can see both underwater and in air with equal clarity. To do this means overcoming serious limitations inherent to the way mammalian eyes are built. You know this from experience, your vision is seriously blurred underwater and you cannot focus. The BBC produced a terrific video about Moken divers that is well worth seeing.

To form an image, light entering the eye is bent to focus it on the photoreceptor neurons of the retina, specifically on the fovea which is a 1.5 mm spot with the highest density of receptor cells, therefore highest resolution, plus other cool design features that reduce scattering and increase spatial resolution. The bending is called refraction and in a mammalian eye it is accomplished by both the cornea and lens. The cornea is the major player, accounting for two-thirds of the eye’s refractive power. It is filled with liquid just a little denser than water and a lot denser than air. This difference is the important thing when it comes to bending light and the difference is lost when air is replaced by water. Without the light bending power of the cornea, images are severely blurred. This is the major reason you cannot focus on objects underwater. A dive mask fixes the problem by creating an air space in front of the cornea.

The human lens is pliable and the final step in focusing an image is to alter its shape. This is the job of the ciliary muscles in the eye that pull on the lens, bending or flattening it to change its refractive index and bring light to fine focus on the fovea. This adjustment is called accommodation, and it is what allows us to focus on both near and far objects. Accommodation works well when we are young, but the lens stiffens with age and that’s why most of us will eventually need reading classes. In any case, accommodation is not strong enough to compensate for the loss in refractive power when the cornea is in water. The result is that the focal point for light entering the eye lies behind the retina. One more important consideration. Like a camera lens, visual acuity is affected by the size of the pupil and is best (ie. at the diffaction limit) when the pupil is at its smallest.

In order for Moken children to see clearly underwater, they either inherited some serious mutations that fundamentally change the way their eyes work, Aquaman style,  or they learn to use their normal mammalian eyes differently in water. Anna Gislen, a vision researcher at Lund University, undertook a twenty year study to find the answer. She discovered that Moken children have more than twice the underwater visual acuity of European children.  First clue, only children possess this  incredible ability.

Gislen knew that theory predicts two ways you can improve your underwater vision. You can change the shape of the lens, accommodation, or you can make the pupil smaller, thereby increasing the depth of field. She measured pupil size of children underwater and found that Moken kids can constrict their pupils to the limit of human performance; 1.96 mm compared to 2.50 mm for European children. A smaller pupil reduces blur to  make things clearer. When Moken kids they hit the water their pupils automatically construct. But as Helen Thomson reports for the BBC, this on its own is not enough to explain their ability. They would also have to be using accommodation, changing the shape of the lens, either consciously or subconsciously to improve focus.

Gislen’s measurements and calculations support that idea.  Moken children appear to achieve superior underwater vision by maximally constricting the pupil  and also by accommodating to the known limit. This extreme reaction is routine for Mokens but completely absent in European children. Gislen says,  “Normally when you go underwater, everything is so blurry that the eye doesn’t even try to accommodate, it’s not a normal reflex.” She suspects that the Mokens lose their ‘dolphin eyes’ when they grow older because the lens becomes less flexible with age. That would explain why you and I, as well as  Moken adults cannot see what Moken children see.

Both pupil diameter and accomodation are controlled by the autonomic nervous system. They are subconscious, but that does not mean that they cannot be learned. Do Moken kids learn  to be diving hunter-gatherers from being in the water so much?

Gislen recruited European children 9-11 years old to do underwater acuity exercises. In their training, they dived underwater and tried to work out the direction of lines on a card. After 11 sessions over a period of a month, they attained the same underwater acuity as Moken children and they retained the ability to maximally constrict their pupils and accommodate when tested after 8 months. When asked if they were doing anything different, the response was “No, I just see better now.” That makes sense, when given a task with reward, like someone saying “good job”, the autonomic nervous system can readily learn. The European kids’ eyes were irritated by salt water, something  Moken children are not bothered by. It is not clear whether this is also something that comes with practice or if it is an inherited Moken adaptation.

Bottlenose dolphins have mammalian eyes and encounter the same challenges we do when moving from air to water. But, they have been around a long time, ~ 5 million years, and have had time to evolve some elaborate solutions. Dolphins have acute vision both in and out of the water, but as suits their lifestyle, the dolphin eye is particularly well adapted for seeing underwater.

In air, the dolphin cornea bends the entering light just as it does in land mammals and this refractive power is lost underwater just as it is in humans. It is the lens that provides all the refraction needed to focus. The dolphin lens is shaped differently than ours. It is not elliptical but spherical like a fish lens. This shape, plus the fact that the refractive index of the lens varies across its diameter, again like a fish lens, allows it to refract light much more dramatically and compensate for the inefficiency of the cornea.

Dolphins maintain fine focus at the retina when moving from water to air. Mokens children do this by changing the shape of the lends, accommodation, but this strategy would not work with a spherical lens. Instead, d0lphins move the lens back and forth in the eye to shift the focal point of the image. This same back and forth movement of the lens is what helps a dolphin focus near and far under water.

The other thing needed to focus underwater is to close down the pupil to increase the depth of field. Dolphins do not do it the way we do, they do something much stranger. Instead of a mechanism that makes the pupil larger or smaller, dolphins have a flap above the eye called an operculum. The flap can drop down over the eye, resulting in two dark spots on either side of the eye to make what is called a double-slit pupil.

There is more. Light levels in the ocean drop dramatically with depth and dolphins make deep dives. Like cats, they have a layer of reflecting cells behind the retina called the tapetum lucidum. Light that passes the retinal photoreceptors without being absorbed is reflected back for a second pass by the tapetum. This increases the chance for photon capture and helps dolphins to see in low light. Also, the cornea is thickened to protect the eye from pressure, and the eye is supplied with arterial blood to keep it warm on dives. There is even a secretion produced by the Harderian gland that protects the eyes from sea water.

For all of these reasons, I can’t see like dolphins do. Still, “I wish I could swim like dolphins can swim” (Heros, by David Bowie).

Modernity has caught up to the Mokens and is changing their culture. There are those who take special interest in these special people and this video tells their story. It is well worth watching and it just might inspire you, too.