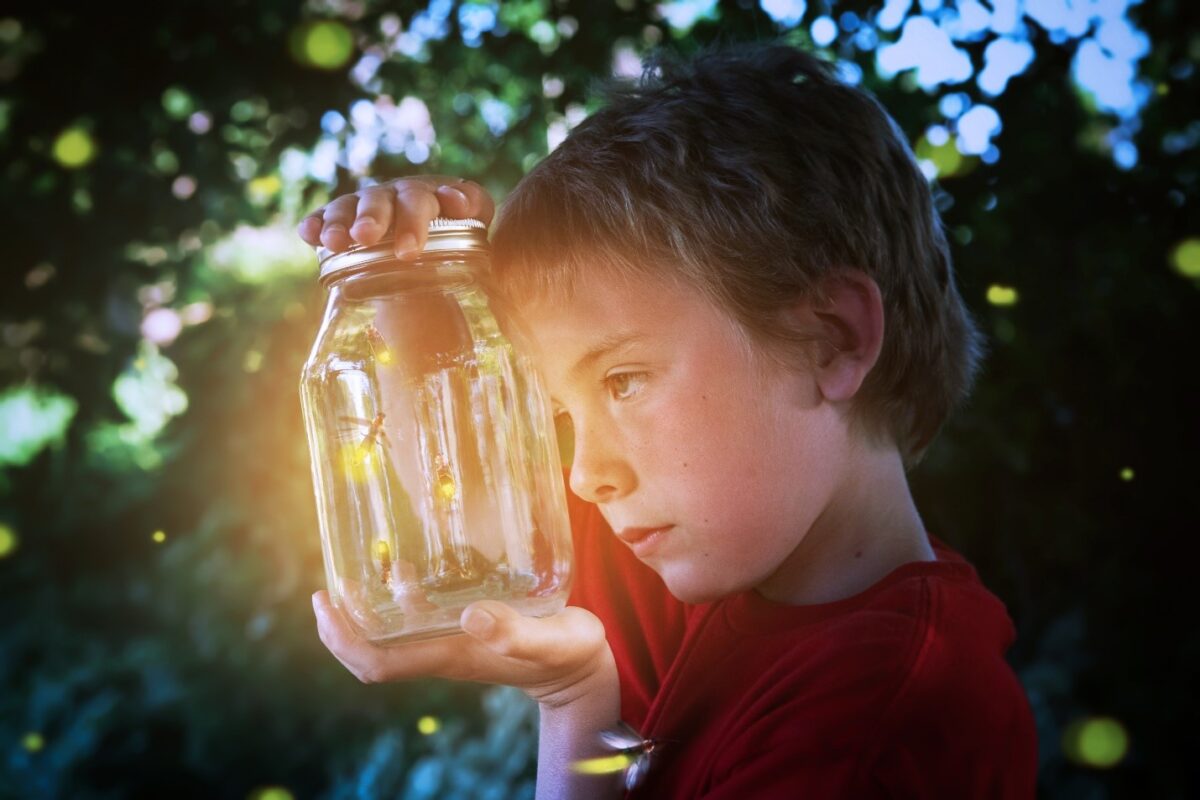 We are each a unique center of experience, receiving information from the rest of the world and the world offers a wealth of attractions to pay attention to.  Although we are equipped to sense a great deal of it, what we perceive at any moment is limited to only a small slice of what we sense. Selective attention is one of the mysteries of  consciousness and, while attention is fundamental to being alive and something we employ all of the time, how the brain is able to focus attention is not well understood. This much is sure, if we were not able to separate the attractions from the distractions, the world would seem an incomprehensible soup of colliding sounds, sights, tastes, feelings, and thoughts.

Some things are so important that we need to pay attention to them all the time while others seem like noise that can be safely ignored, right up to the moment when, for whatever reason, they suddenly become critically important. The brain’s attention networks ensure that we direct our thoughts toward the small part of the world that is most relevant at the time. How is the choice made? Selecting what to allow into our conscious perception so that we can act on it, and what to ignore is the business of neural networks in the brain. Figuring out how they work is the business of cognitive neuroscience.

One thing I learned about selective attention is the odd fact that where we focus our awareness is not always a matter of choice. It is abundantly clear that attention shifts, and quickly. In fact, what we attend to can change seconds before we become aware of the change. The favorate tool neuropsychologists use to study such things is fMRI brain imaging and in the next few paragraphs I’ll share my effort to catch up with what they have found. But I have to begin with a disclaimer. fMRI imaging is limited when it comes to speed. The images are snapshots that take seconds to acquire. The human brain, on the other hand is wicked fast. The speed of nerve conduction in large axons is up to 275 mph and the delay at a synapse can be a brief as 0.4 millisecond. This means that fMRI misses the dynamics associated with shifts in attention. It can tell us something about where events happen in the volume of the brain, but not how they happen.

One way to think about attention is to make the simple assumption that your brain chooses what you perceive while neglecting everything else. For example, you choose to pay attention to just one conversation in a crowd, you can find your keys in a cluttered room, and you can usually stop in time to save the squirrel that darted into the road. In this view, we choose to highlight certain information, possibly by comparing present data with some sort of mental construct. This leads to the idea that attention is like a spotlight that we can point where we choose. Maybe, but it is hard to imagine how a spotlight would actually work. Where did the mental construct come from, and how many constructs would you need in order to function in the real world? The simple spotlight model is out of fashion. I am reminded of what Huw Price wrote in  Time’s Arrow and Archimedes’ Point, “…concepts of cause and effect derive from our experience as agents in the world and may not be a fundamental feature of reality.” It is fair to say that our minds construct the past, present, and future, and sometimes get it badly wrong.

We can enhance features like color, contrast, or loudness, tasks that involve cortical networks. Also, we can apply intense concentration for considerable periods of time, an ability magicians, grifters, and politicians use to distract us. With that ability, it is reasonable to imagine that selective attention is an executive function, operating in a top-down manner. The brain simply enhances a particular set of inputs in order to bring them out of a noisy background. I have to wonder, however, if a system based on cortical processing and involving multiple circuits with many thousands of neurons and millions of synapses is fast enough. The problem is that the time between sensation and cognition , which is easily measured, is half a second at a minimum. Consider that a car at 60 mph travels 44 ft in ½ sec. If we had to be conscious of what’s going on before acting, squirrels would be in deep trouble were it not for the fact that we hit the brakes well before we know that we hit the brakes. That speed is a gift of the subconscious.

According to brain imaging, selective attention involves several large, distributed neural networks in the parietal and frontal cortex; the dorsal attention network (DAN), the ventral attention network (VAN), and the default mode network (DMN). The DAN directs attention toward something specific, and when it is active the other two networks, VAN and DMN, are quiet. If something new or surprising occurs there is a shift, the DAN switches off and the VAN switches on. The shift causes attention to be redirected. The ventral network is involved mostly in involuntary actions while the dorsal network is concerned with sensory-motor activities like reaching, grasping, and using objects or tools.

The default mode network (DMN) is different, it exhibits increased activity when we are not focused on outside events but instead on internally directed and self-relevant thought. One way to describe the DMN is that it creates internal scenes, episodes, or contexts apart from constraints of the external environment. When the default mode network is active, the dorsal attention network is quiet, which amounts to a functional separation of internally directed and externally directed thought. This brings up a question, why is the universe split in two for each of us, into a subject and an infinity of objects?

Before the cortical attention networks get to do their job, there’s already been a deep pruning of information. This involves circuits that are much older than the cortical ones in an evolutionary sense and are present in all vertebrate animals. It works at a subconscious level and involves the thalamus and basal ganglia, nuclei that are functionally much closer to the sources of sensory information both physically and temporally. Also, they work by suppressing distracting signals using tuned filters rather than by using spotlights.

Francis Crick was first to propose that attention is controlled by the thalamus, a collection of deep brain nuclei that receive input from sensory organs, and from other parts of the brain, and feed it to the cortex. His idea is that the sensory part of thalamus acts as a gatekeeper to sort information and establish a level of focus. Michael Halassa at MIT, showed that inhibitory neurons in the thalamus do, in fact, perform this function. Cortical and thalamic networks appear to work together to inhibit specific signals from reaching higher levels in the brain if they are deemed to be distracting. Imagine a mouse focusing on sounds in its environment. The mouse brain tells the thalamus to block input from the retina that is irrelevant to the sounds being attended to. In this idea, the spotlight metaphor is simply backward; the brain doesn’t enhance the input of interest (sounds), it turns down the input in competing channels (light). This kind of control over attention can be very precise and specific, and because the pathway is short, it can be fast. How this might work at the cellular and synapse level is fuzzy, but the concept is that subconscious processes establish a level of f0cus before cortical networks get involved.

Nicolas Burra at Universite De Geneve studies an attention grabbing social situation, meeting someone’s gaze. Eye contact activates rapid and automatic attentional processing and is usually followed by an immediate emotional response. Brief eye contact, just a glance, causes a subconscious shift in attention. It also distorts our sense of time. We underestimate the time that elapses during eye contact; we actually hold the other person’s gaze longer than we imagine. Time distortion is true of other events that draw acute attention, call them emergencies, in these situations events seems shorter than they really are. It is fascinating that one of our strongest social signals has this effect.

How the brain controls what to let in and what to keep out is mysterious, but like many mysteries in cognitive neuroscience it has a name, ‘active inference’. The concept is that the brain knows in advance the inputs to suppress according to experience. Deviation from expectation causes attention to shift. For example, a mouse attending to a particular sound can predict what extraneous sounds or images to expect and suppress them while maintaining the ability to be surprised. Included in this is the idea that the fit between model and data improves with experience. Think of a newborn baby who at first pays special attention to its mother’s face and later extends awareness to other faces. Active inference is just an idea , but one thing is for sure, the neurocircuitry must involve high speed connections.

This kind of control over attention can be very precise and specific, and because the pathway is short, it can be fast. How this might work at the cellular and synapse level is fuzzy, but the concept is that subconscious processes establish a level of f0cus before cortical networks get involved.

But, there is a conspicuous problem with all of this, and it has to do with time. What happens if suppressed information suddenly become terribly important, requiring a rapid shift in attention and change in behavior? 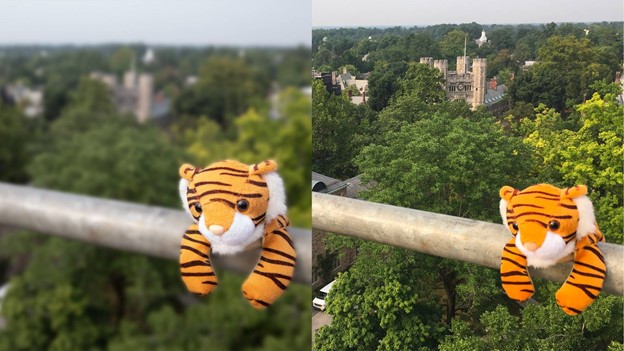 The idea that we are continuously in touch with our surroundings is an illusion. The truth is perception pulses from one thing to the next and back again. Although we may think we are tightly focused on an object, like the Princeton tiger perched on a fence, our brain scans everything else in our surroundings at a rate of four times per second, every 250 msec. In the case of the tiger, from the left image to the right and back.

Sabine Kastner at the Princeton Neuroscience Inst. says, “Perception is discontinuous, going rhythmically through short time windows.” How does something that varies in time match with our seemingly continuous perception of the world? The brain fuses perceptions into a coherent flow so even though we experience the gaps, perception doesn’t flicker on and off, like an old time movie. Instead, four times per second it cycles between periods of maximum focus and periods of a broader situational awareness. “This means that every 250 milliseconds, there is an opportunity for attention to switch.” Ian Fiebelkorn  (U. Rochester)  says, “You won’t necessarily shift your focus to a new subject, but your brain has a chance to re-examine your priorities and decide if it wants to.” Pulsing attention has an evolutionary advantage. Remaining tightly focused on what’s in front of you would not be helpful if the tiger is sneaking up from behind.

Attention networks are continuingly casting in a sea of information, searching for what; novelty, surprise, particular multidimensional patterns? The fact that awareness is fluid is one of its fundamental qualities. To quote Fiebelkorn, “The brain seems to be wired to be periodically distractible.” Sound familiar?