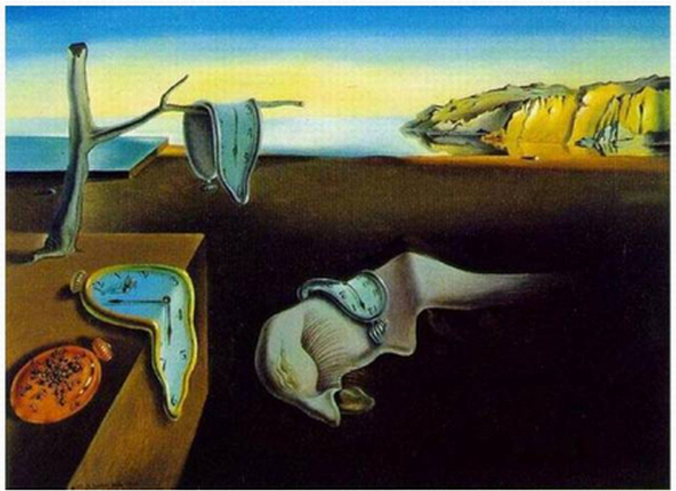 There is something paradoxical about long-term memory. Our most cherished memories last a lifetime, in fact, they can return after long absence. This is a wonderful thing, but how does it happen? Here is the issue; memory involves architectural changes that require, among other things, the construction of new synaptic connections and changes in protein scaffolds within synapses. This consolidation process requires gene expression and the synthesis of new proteins in order to strengthen specific synaptic links. Inhibition of protein synthesis prevents the assembly of these structures and both the consolidation of new memories and the reconsolidation and strengthening of old memories on recall. Very impressive work has identified some of the proteins and translational factors that modulate the timely expression of those proteins. There is a problem, however. The proteins involved are subject to rapid turnover, and this means that for a memory to last, the synapse and its architecture has to be continuously updated or the memory will disappear in a few days.

This photo from David Sulzer’s lab at Columbia Univ. Medical Center makes the point. The upper panel illustrates the appearance of a neuron branch, a dendrite, before memory consolidation while the lower one shows how dendrites appear after consolidation, the protrusions are dendritic spines. Synapses form largely on spines, so the elaboration of new spines indicates a large increase in the number of synaptic connections. The change occurs when a pathway has been strongly activated. This is neuroplasticity and it clearly involves a dramatic rearrangement. Memories are made of this! 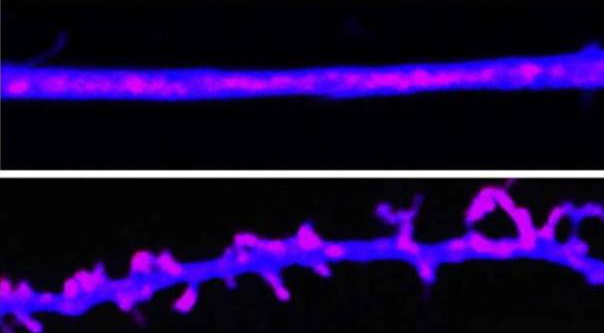 The question is, what processes orchestrate the changes in specific synapses and guarantee the persistence of memory in the face of protein turnover?

Eric Kandel and his collaborators at Columbia Univ. Medical Center found a key player and surprisingly it is a prion-like protein. They propose that memory storage, and the synaptic plasticity that underlies it, is mediated by the prion-like translational regulator named CPEB3. They demonstrate that deleting the CPEB3 gene in mice disrupts the formation of spatial memories, something very important to a mouse, as well as the cellular process responsible for memory formation in the hippocampus.

A unique feature of the CPEB3 system is that memory persistence results from the assembly of CPEB3 monomers into prion-aggregates that function to sustain the protein synthesis within the synapse necessary to maintain long-term memory. This appears to be a highly conserved system important to long-term memory in Drosophila, the sea hare Aplysia and mouse. A similar protein exists in humans, suggesting that the same mechanism may be at work in the human brain.

About prions
Some discussion of prions is in order. Most of us know prions as the sinister infectious agent in mad-cow-disease and Kuru. Kuru, a truly horrible neurodegenerative disease, came to light among the Fore People of Papua New Guinea and was traced to ritual cannibalism where people ate the brains of their dead. Stanley Prusiner  received the Nobel Prize for the discovery. Prions are proteins that are found in all cells where they normally function as everyday epigenetic modifiers of gene expression.

The way proteins work is largely a matter of shape, where 3D structure determines what a protein binds to and how strongly, or the enzymatic reactions it catalyzes. Misfolded proteins, on the other hand, are a big problem and cells usually have ways to neutralize or eliminate them. In the case of prions, they are able to take on multiple shapes, called conformers, that are aggregates of the core protein are very stable, persisting over many cell cycles, and self-propagate which means they act as heritable epigenetic agents. This is not DNA based inheritance, but a completely different kind of molecular memory, one that is capable of recording the history of gene expression and passing down the history along family lines. Two of the experts, James Shorter & Susan Lindquist, put it this way; “Prions transmit lethal neurodegenerative diseases by means of the food chain. However, self-replicating protein conformations can also constitute molecular memories that transmit genetic information.” See their review in Nature.

As single protein molecules, prions bind to regulatory sites on mRNA to regulate gene expression, but as aggregates they can have additional roles. One possible role is to kill the cell. A dying neuron releases the prion aggregates, which are taken up by other cells and the infection spreads, an infection with the power to modify gene expression. This is kuru and mad-cow disease. But, there is a whole other side to the prion story. Prion monomers are functional proteins that play crucial roles in the normal physiology of cells and do not cause disease. But aggregates of prion-like proteins can also have important physiological roles. The role of CPEB3 in long-term memory consolidaton is a prime example.

CPEB3 functions as both a sensor and a switch at synapses
Synaptic transmission causes a localized burst of CPEB production at specific synapses in response to neurotransmitter cues. The increase induces CPEB prion conformers to form that function as RNA-binding proteins that bind short 3’RNA motifs termed cytoplasmic polyadenylation elements (CPEs). Once formed, aggregated prions trigger the translation of otherwise dormant mRNAs that are essential for strengthening the stimulated synapse. These include structural proteins including N-actin and regulatory proteins involved in axon guidance and synaptic plasticity. Active CPEB conformers are self-perpetuating and persist without any further extraneous signals which means that the prion switch is much less easily reversed than more traditional molecular memories that require continuous kinase and/or phosphatase enzymatic activity.

As Kandel puts it, as long as these aggregates are present, long-term memories persist. Prion aggregates renew themselves by continually recruiting newly made soluble prions into the aggregates. “This ongoing maintenance is crucial. It’s how you remember, for example, your first love for the rest of your life.”  The work by the Kandel’s group continues, motivated by the thought that CPEB prions might be responsible the engram (the memory trace) in neuronal tissues. Memory and recall are, of course, complex processes that undoubtedly involve a host of interacting molecular events. The prion-like proteins are opening an exciting new window into the process.
-Neuromavin