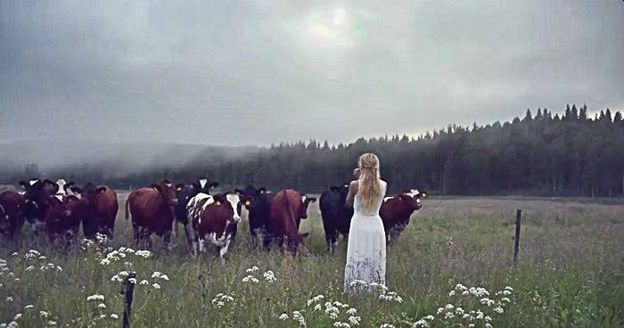 Living an urban life but longing for the outdoors creates a special kind of tension. From my central Caifornia city, I feel the call of the Sierra Nevada. For Jonna Jinton, a young woman living in Gothenberg, Sweden, the call drew her to the birthplace of her ancestors, the village of Grundtjärn, where as a child she spent one week every summer on a small farm, remembered as the best week of the year. She lives there now, just below the Arctic Circle. She is an artist, blogger and performer of the ancient and beguiling practice of kulning, a Nordic singing tradition used to herd livestock and to communicate over vast distance, that dates back to medieval times. The sounds of kulning are evocative and have a strong effect on emotions and sense of well being. Do animals experience similar feelings? This is the question I want to address in a journey that will take us on a search for the origin of music. But first, here is Jonna Jinton kulning. There are many examples of her performance art.

The magic of kulning combines controlling how one’s voice travels across natural landscapes with knowledge of animal calls. The sound is ethereal and hard to describe, but the feeling is unequivocal. Julia Prinselaar, writing in Northern Wilds, interviewed Jonna Jinton; “A woman demonstrated kulning and it was the most amazing sound I had ever heard. When I moved to this place and I could be all alone in the forest, I sometimes tried to make these high-pitched sounds because the echoes were so magical. No matter from what country or culture, people from all over the world get the same kind of feeling as I do. As if it reminds them of something. It makes people get teary eyes and shivers all over, in a good way.  I wanted to learn kulning because the sound really awakened a special feeling in me. It was as if the sound spoke to my soul and reminded me of something. Of the sounds, it is said that they are neither happy nor sad, but have a kind of longing or prayer-like quality as if someone is calling out, waiting for an answer.”

Jonna gave us a clue about the origins of music when she said kulning gives her chills. That means her autonomic nervous system is activated causing dopamine to be released from neurons in the striatum, center 0f emotion processing. Dopamine works in concert with the stress reducing/affiliation hormone oxytocin to produce a pleasant high that can be quite addictive. I think we all agree that music is the language of emotion. What interests me is that kulning communicates so effectively on an emotional plain to both humans and animals.

Kulning is also an art form that can be appreciated aesthetically and intellectually. Jennie Tiderman-Österberg, opera singer and punk rocker, authored a history of Kulning for the Smithsonian. She also hosts popular open-air kulning concerts in remote Swedish forests. Concerts are scheduled during the summer and visitors are welcome. It is also part of well attended wilderness retreats for women, for example The Nordic Woman international kulning retreat, something to consider when travelling to Scandinavian and to round out your experience, the Dalarnas Museum  maintains an archieve of kulning songs.

The emotions inspired by kulning, in performer and audience, remind me of music therapy with its intent to promote healing. Kulning also has a place in traditional Nordic healing. It appears that the sounds touch something deep in our conscience.

Charles Snowdon and colleagues proposed that music evolved as emotional signaling to promote social cohesion and that it predates language. So, is music unique to humans or does it have a much older evolutionary history? To answer that, one need only look at the role music plays in the lives of other big brained animals, for example by studying the role rhythm, pitch, and prosody-the intonation contours of sound- play in animal vocalizations and compare them with human music. There is a big academic literature on this, but to greatly simplify it, consider that several short, upwardly rising staccato calls lead to increased arousal. Long descending intonations have a calming effect, and behavior can be stopped cold with a single short plosive note. We use these in calls and whistles to control working animals. The same features occur almost universally in animal songs, and in much of human music, too. The point is, these are universal signals that apply across species and this suggests an ancient origin. Jane Goodall’s work with chips on this topic is brilliant, here is Pant-Hoots 101.

Are composition and musicianship, I mean making music for its own sake, unique to humans? I don’t think so. Elephants love to make music. Richard Lair created the Thai Elephant Orchestra. Elephants are given instruments specially designed for them, harmonicas, drums, marimba, and such. It turns out that elephants are able to hold a beat better than most of us, and that together they compose delightful and elaborate concerts with movements, choruses, and solos. It is clear that they truly enjoy making music. Here is a performance of ‘Rain’ by the Thai Elephant Orchestra. One more.

Whales make music, too. A podcast by NPR’s Morning Edition makes this point; “Humpback whales don’t just sing songs — they compose with the whales around them, singing a song that evolves over time.” The NPR piece features conversations with Katy Payne, a student of animal song at the Cornell Lab of Ornithology, the first person to realize that the eerie calls of humpbacks are actually music. Katy says, “At any one time, all the humpbacks in the population sing the song in the same way. As time passes, though, all parts of the song change – in rhythm, in pitch, in duration – and all the whales repeat the changes. They were creating new songs – composing.” Humpback singing is performance art composed by the group. Here is a link to the NPR story, and another to a National Geographic podcast.

Sharing in the composition and performance of music requires shared knowledge of musical principles, ones with deep roots. Consider the pentatonic scale, highly versatile, it appears in different cultures as the default set of notes. In the West, the pentatonic is used in such a wide range of musical forms that you just have to believe it is fundamental to the way our brains function in making and appreciating music, and perhaps speech, too. Bobby McFerrin demonstrated this in a very entertaining way.

It gets more interesting when you bring in vocalization. Here, Bobby McFerrin and Joey Blake improvise in voice.

The improv leans into tones and rhythms, using few words. Yet the message is abundantly clear; friendship, empathy, synchrony, shared experience, respect, humor, joy, more. All transmitted by song without need for spoken language. Is this the way our human ancestors communicated?

Neanderthals, big brained hominids, lived alongside modern humans in Europe for about 5000 yrs. They had a very long history, first appearing about 430,000 years ago, and then disappearing some 40,000 years before the present. They are our near relatives, we carry some of their DNA. So, did they communicate with sound and song? Did they have spoken language?  Could we have spoken with them? Not clear.

Serious people are interested in the the sounds Neanderthals might have made, and how their voices might have sounded. A PBS project puts the search to understand Neanderthal vocal life in context. A kind of wild BBC project goes further, bringing together a vocal expert, Patsy Rodenburg of the Guildhall School of Music & Drama, and a talented voice actor to explore how Neanderthals might have sounded based on anatomical knowledge derived from the fossil record. Take a look, it forever changed the way I view the opening sequence in ‘2001: A Space Odyssey’.

Speculative, but interesting because it opens a window into our history as vocal beings.  I enjoy thinking about how we became so very accomplished in music, song, and speech and how it began, because as we both know, “music is life itself.” (Louis Armstrong).