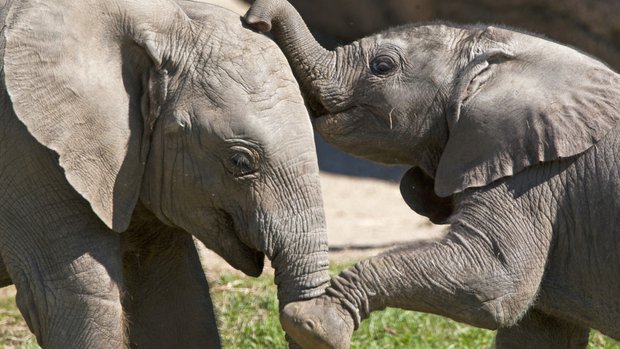 A unique type of neuron, found in humans and only a few other animals and always in small numbers, is generating an inordinate amount of speculation among neurobiologists, and the speculation is fascinating.

These are the VEN neurons, named for their discoverer, Austrian neurologist von Economo, and they occur in well delineated locations in the brains of humans, great apes, cetaceans (whales and dolphins) and elephants, but nowhere else. This is a remarkable assemblage of creatures for three reasons; they all have large brains and a well developed cerebral cortex, they are only distantly related suggesting convergent evolution and, most importantly, they are all highly social animals expressing self-awareness, empathy and Theory of Mind.

VEN neurons are large, about three times bigger than neighboring cortical neurons and they have long, large diameter axons. These features allow rapid communication between distant points because the rate of conduction of impulses in axons is proportional to axon diameter. Could this explain why VENs are only seen in big brained animals, perhaps as an adaption for synchronizing activity, or is there more to the story?

The convergent evolution of VENs in highly gregarious animals that exhibit complex social interactions strongly suggests a special role in social cognition, a notion promoted by John Allman at CalTec. The idea arose from thinking about the places where VENs are found in the brains of humans; namely anterior cingulate cortex (ACC), anterior-insular cortex (AIC) and dorsolateral prefrontal cortex. Three regions deeply involved in social cognition.

All three areas are particularly active when people experience emotion and are important for self-monitoring, such as awareness of bodily sensations of pain, hunger, intense emotion or recognizing that one has made a mistake. Dorsolateral prefrontal cortex is active during emotional anticipation and when inferring the intentions of others, as well during planning and abstract reasoning http://bit.ly/1Gzv6CL.

The AIC deserves particular attention because it plays a prominent role in generating social emotions such as empathy, trust, guilt, embarrassment, love, self awareness and a sense of humor. It becomes active when a mother hears a baby cry, or when someone scrutinizes a face in an attempt to discern another’s intentions. The AIC also appears to monitor and react to gut feelings resulting from bodily sensations, including those resulting from interactions in a social setting. All of this suggests that self awareness and social awareness have a shared neural mechanism http://bit.ly/1BIXRhI.

Brain imaging (fMRI) studies show that there is close functional coupling between the anterior insular cortex (AIC) and the anterior cingulate cortex (ACC), another of the areas with significant numbers of VENs. Intense emotion activates the ACC, a relay point for signals from the amygdala (a primary processing center for emotions) to frontal cortex (the center for executive action). The ACC is also active during tasks requiring judgment and discernment, and when errors are detected by an individual. When we are experiencing intense feelings of love, anger, or lust activity in the ACC increases, underscoring its role in affording a heightened degree of social sensitivity.

VENs and Theory of Mind
Theory of Mind (ToM) is a concept from psychology that refers to the ability to understand that others have beliefs, desires, plans, hopes and intentions that may differ from our own, but also that we might understand them through self-knowledge. Infants become socialized by developing ToM. Some neurodevelopmental disorders, including autism spectrum disorder (ASD), attention deficit hyperactivity disorder (ADHD), developmental language disorders, and schizophrenia are associated with impaired ToM. So is traumatic injury to the right brain. Theory of Mind involves lots of processing; moral reasoning, intention tracking, sense of self, emotion processing, empathy and mirroring. In addition, ToM depends on the orderly development and maturation of brain systems, a process that extends throughout childhood. This means that ToM is shaped by parenting, social relations, training, and education. We use Theory of Mind nearly every moment of our lives,  it is that important, and that central to what it means to be human http://bit.ly/1LSWBKo.

What do VENs have to do with ToM? This is not a simple question and frankly, nobody knows. There are, however, some interesting bits of circumstantial evidence. VENs occur in cortical regions associated with emotion, empathy and sense of self and send projections to the frontal cortex, but are they necessary for these cognitive functions? Clinical research offers some insights. Traumatic damage to the AIC leads to apathy and to an inability to discern the feelings we and our partner’s are experiencing. Also, VENs in the AIC are selectively depleted in frontotemporal dementia, a progressive neuronal degeneration resulting in the loss of over 70% of VENs, while sparing other neuron types. It is second only to Alzheimer’s disease (AD), and accounts for 20% of young onset dementia cases. The symptoms are impaired Theory of Mind and impaired interpersonal behaviors. Of course, this encourages speculation that VEN loss may be involved in AD, but there is currently no evidence to support that.

Theory of Mind develops slowly during early childhood. With that in mind, I find it interesting that VENs are almost absent at birth and normally increase in number and density during the first four years of life. Dorsolateral prefrontal cortex and the AIC also undergo a prolonged period of maturation that lasts until adulthood, a time course that parallels the slow maturation of emotion regulation, motor control and decision-making in children. The slow development leaves ample time for parental, epigenetic, environmental and social factors to influence both the expression of VENs and the development of Theory of Mind. This important point by itself provides ample reason to explore the function of the VEN system.

I have asserted that VENs, and the brain structures they are found in, are involved in making inferences about the psychological state of ourselves and others, analyzing impressions and constructing theories on the basis of the cues and information we receive. Mindreading, in other words. Here is the question: Did the appearance of VENs enable the elaborate social behaviors of humans, whales and elephants to develop? If so, this suggests the interesting idea that strengthening the loop linking emotion to perception in such a way as to engage empathy and Theory of Mind, opened the way to the formation of societies.

Consider this, dorsolateral prefrontal cortex, more a function than a well defined structure, with its VEN neurons is one of the most recently evolved parts of the human brain. The AIC, with its compliment of VENs, also appears to have undergone significant evolutionary change perhaps as recently as 100,000 years ago, a time span that encompasses the dawning of human societies.

Are VENs involved in autism?
It is often suggested that VEN depletion, or altered VEN function, may have a role in ASD. That seems reasonable since impairments in ToM are hallmarks of children with autism, even those with normal or high levels of intelligence. There is, however, no direct evidence to support this, although there is some indication that in ASD persons, VENs may be slightly displaced from their more normal location in the AIC.  However, as my brilliant graduate student, Sam Wang, pointed out to me; it is far-fetched to image that something as simple as the absence of VENs could explain the complexity and diversity of childhood behavioral disorders like ASD and ADHD. His point is well taken.

There are big gaps in our knowledge of VEN neurons, especially with regard to function and input & output connections. You can be sure, however, that interest in VENs will not go away until we know exactly what they are doing in the most recently evolved, socially attuned, and most sophisticated nervous systems. And, of course, we can look forward to being surprised.