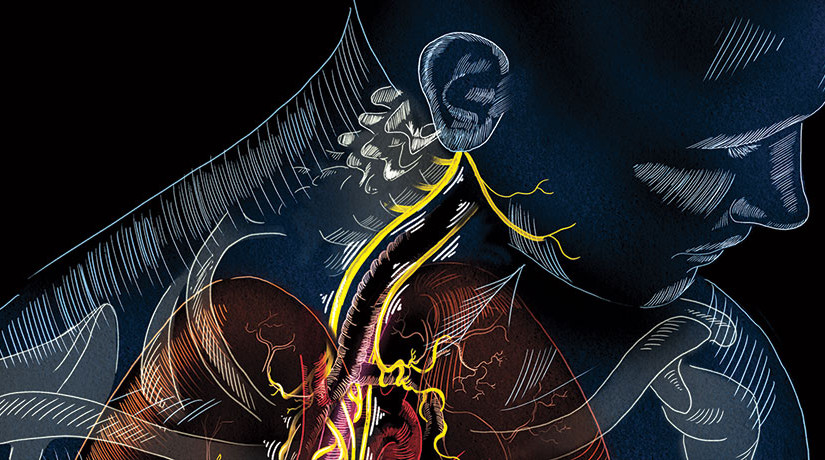 The vagus nerve (in yellow) is the great connecter that links brain and body. Its path from the head to the heart and other organs was detailed by the Greek anatomist Galen, physician to the Roman Empire in the 2nd century, and because of its extensive projections it is called the wandering nerve (vagus is Latin for wanderer). It courses between the nuclei of the medulla in the brain stem and nearly every organ and is a major component of the parasympathetic nervous system. Efferent nerve fibers in the vagus regulate heart rate, blood pressure, digestion, inflammation and immunity. But the vagus supports two-way traffic and nearly 80% of its axons carry information from the body to the brain, providing feedback on organ function.

Clearly there is much to explore on the road to understanding the intricacies of the vagus nerve. For now, however, I want to concentrate on its role in regulating blood pressure, a timely topic in light of new appreciation of the link between elevated systolic blood pressure and TIA (transient ischemic attack), stroke, depression, dementia and shortened lifespan.

Stimulating the vagus with implants

The FDA approved the first surgically implanted vagus nerve stimulator (VNS) for epilepsy in 1997 and the device has proven safe and effective for patients who do not response to more conventional therapies. But the researchers noticed an additional benefit, the patient’s mood improved. They found the same thing in persons without epilepsy and in 2005, the FDA approved vagus nerve stimulation (VNS) to treat drug-resistant depression, providing an important treatment option.

Implanted vagus nerve stimulators (VNS) send electrical pulses from a generator in the chest to the nerve in the neck. A pulse generator, similar to a cardiac pacemaker, is surgically implanted under the skin of the left chest and an electrical lead is connected from the generator to the left vagus nerve. To turn the stimulator on/off, the patient holds an external magnet up to the implant.

Another possibility is that vagal stimulation suppresses neuroinflammation.  A potential pathway might involve the neurotransmitter acetylcholine which hinders the production of inflammatory cytokines by macrophage. A similar action might apply to microglia in the brain; a key component of the brain’s own immune system.

VNS for depression attempts to target the nerve fibers that shuttle information from body to brain, but it is not possible to do that selectively with electrical implants. That is a problem because of the many functions that the millions of axons in the nerve influence both in the body and in the brain.  Many axons are stimulated by the implanted electrode nonselectively. Development is needed to improve specificity and to determine the optimal amplitude and pattern for stimulation. And of course, a non-invasive method would be preferred in most cases.

A company named electroCore takes a different approach, and their concept is likely to stimulate others to create more designs. They make a small handheld device that stimulates the vagus when held externally against the neck. They initially tested it as a way to reduce asthma symptoms, drawing on the nerve’s anti-inflammatory action. But during testing, patients reported that their headaches were disappearing. The company is now testing the device to treat chronic cluster headaches, with some promising results.  No word yet on help with stress and depression.

In the ear, afferent axons in the vagus nerve run close to the surface, especially in the small flap of the tragus that covers the ear’s opening (see the figure). These project to the spinal trigeminal nucleus which receives information about deep/crude touch, pain, and temperature of the outer ear. This location has been known to acupuncturists since antiquity. Researchers have been exploring this pathway, stimulating nerve fibers through the skin of the ear, to treat heart failure, epilepsy and depression, as well as memory loss, headaches and even diabetes. They report some success, but all very preliminary.

You don’t need electric shocks to get the benefit, however. Finger pressure applied to these points in the ear has a remarkably soothing and relaxing effect and markedly reduces anxiety. You really must try it for yourself, and if you combine it with deep breathing, I think you will be pleasantly surprised. 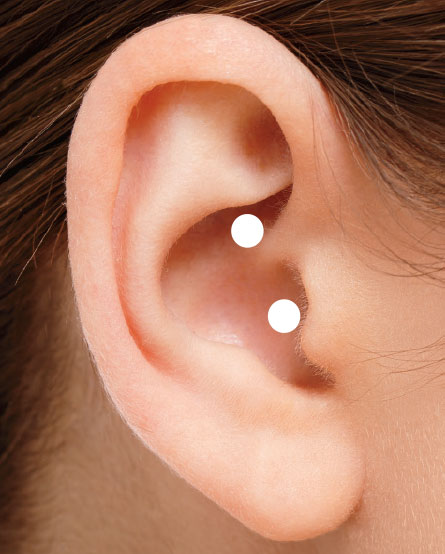 The vagal response reduces stress, heart rate and blood pressure and it stimulates digestion, all the things that happen when we are relaxed and at peace. Activating the vagus nerve releases an array of anti-stress molecules and hormones such as acetylcholine, prolactin, vasopressin, and oxytocin. Vagus nerve stimulation is also associated with improved memory, immune function, sleep, and elevated growth hormone. This is all good stuff, so how can we activate the vagal response and improve vagal tone all by ourselves?

The simplest, non-invasive way to stimulate the vagus, improve vagal tone and fight anxiety, stress and depression is to breathe, just take a deep breath. The trick is to extend the inhalation/exhalation cycle and breathe slowly and from the belly. This is the core of pranayama yoga and because breath can be controlled consciously, unlike most functions regulated by the vagus nerve, it can be used to link mind and body in powerful ways. A very good practice that is easy and effective is called 4-7-8 breathing. I wrote about it in my blog “Breathe Yourself to Sleep” and you will find a demonstration video there.

Healthy vagal tone is indicated by a slight increase in heart rate when you inhale, and a decrease when you exhale (the differences are too small to see without special equipment but are important indicators of cardiac health). Deep breathing with a long, slow exhale is key to stimulating the vagus and lowering heart rate and blood pressure; especially useful in times of performance anxiety. Plus, higher vagal tone increases physical and psychological well-being.

Try this practice: Combine manually applying pressure to the ear pressure points shown above together with 4-7-8 yogic breathing. I think you will be amazed by the benefit, and it just gets better with practice.